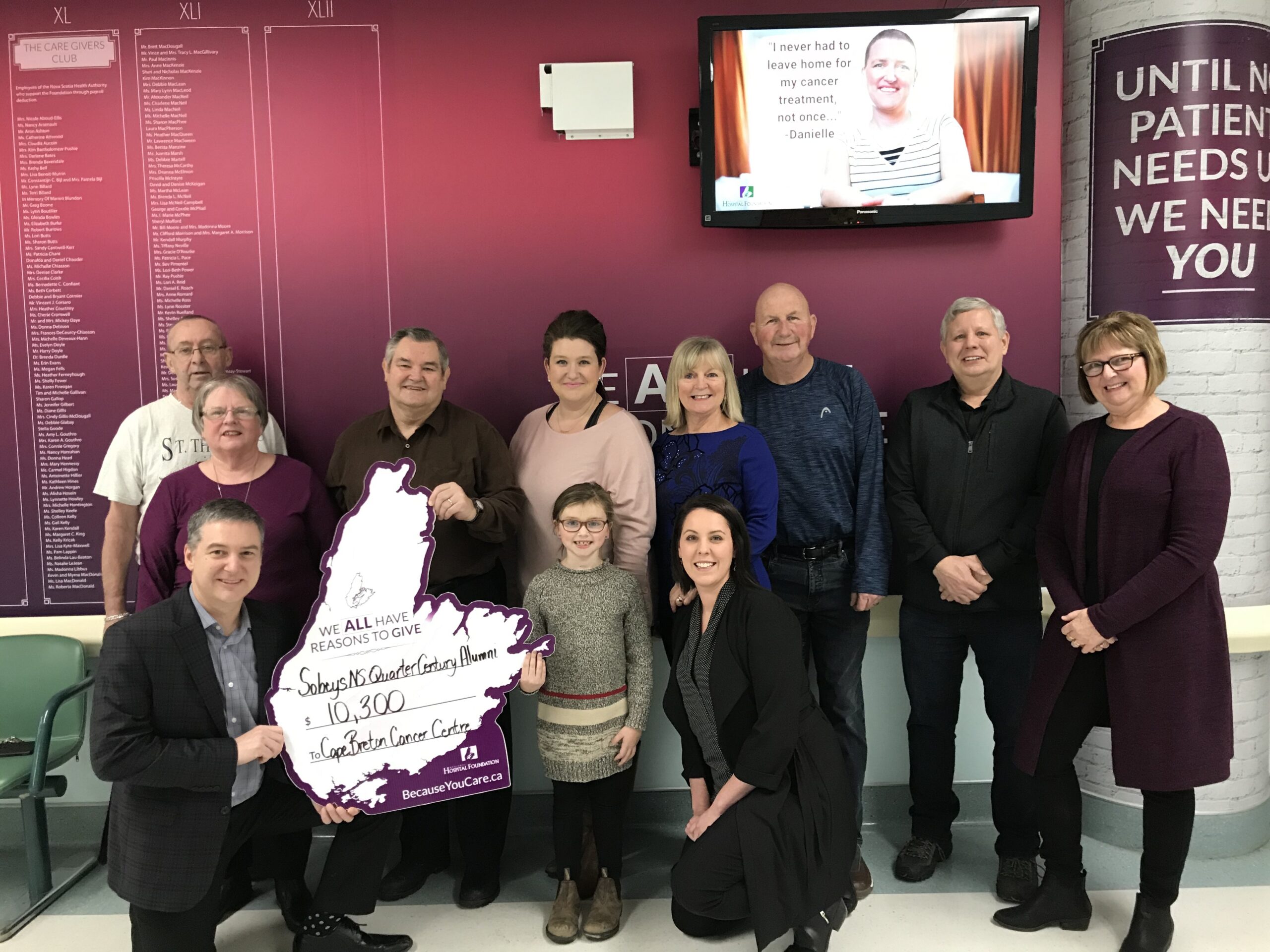 The donation, one hundred per cent of which will stay in Cape Breton, was inspired by former Foodland Sydney Mines owners, Ellen and Roddie MacKenzie, who have both been patients of the Cape Breton Cancer Centre. Ellen was diagnosed with cancer in January of 2018, Roddie in 2011.

Ellen and Roddie owned the Sydney Mines Foodland until last year when their daughter Ashley and son-in-law Kyle took over ownership. The former owners both battled cancer in Cape Breton and both won their battles, but understand giving back is the only way that others can continue their cancer battles here at home.

“When we had the opportunity to choose a charity, there wasn’t any question that we wanted the funds to go to the new cancer centre,” said Ellen MacKenzie, who won her battle against cancer just last year. “Having all of my cancer care at home, with my granddaughter, daughter and husband by my side – that’s how I overcame my battle.”

The $10,300 gift was made possible through the 2019 fundraising efforts of the Sobeys Nova Scotia Quarter Century Alumni and matching funds that were donated by Sobeys Inc. Every year, the group of Sobeys Quarter Century Alumni choose a local charity. “It’s incredible that this group saw Ellen and Roddie’s story and chose to help make an impact,” explained Cape Breton Regional Hospital Foundation CEO, Brad Jacobs. “Our current cancer centre, built in 1995, was designed for 16,000 patient visits per year, but is seeing upwards of 45,000 patient visits every year. More than 150 patients walk through the doors each day for everything from chemotherapy and radiation therapy, to consultations with social workers and more.”
The Foundation recently launched a multi-year, multi-million dollar campaign to help build Cape Breton’s new cancer centre and, with the generosity of groups like this, the centre will be ready to serve the growing population of cancer patients in Cape Breton.

Darlene Rozicki, Sobeys Nova Scotia Quarter Century Alumni Committee member, was thrilled to honour Ellen and Roddie by recommending their charity of choice. “The owners and employees of our stores exemplify community,” said Rozicki. “They care about their communities, neighborhoods, friends and families first and foremost. This was an easy donation to make and we’re proud to be a part of providing cancer care for future generations in Cape Breton.”

Since 1990, the Cape Breton Regional Hospital Foundation, in partnership with the community has raised more than $50 million to purchase equipment, and fund upgrades at the Regional Hospital. This has reduced wait times and provided an increased menu of services – closer to home. The Foundation has recently been accredited under Imagine Canada’s national Standards Program, which promotes transparency of charities and nonprofits, and strengthens public confidence in organizations and the sector as a whole.