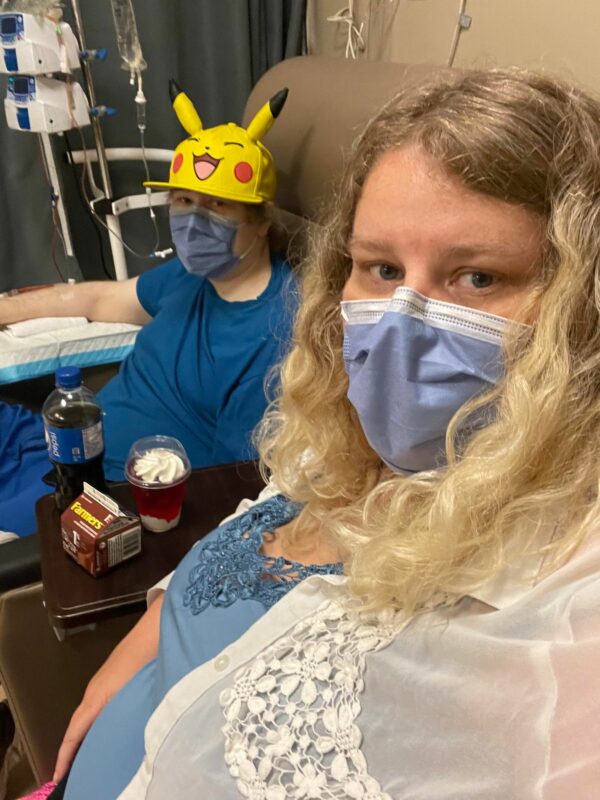 These past few years have been tough on most of us, myself included. In fact, this past year has been the hardest of my life. I’ve spent almost every single day at the Cape Breton Regional Hospital, watching several of my loved ones be cared for by health care professionals. Some outcomes have been positive, and unfortunately, others have not.

My name is Christina Joe and I’m the primary caregiver to my son, Allan MacDonald, who was diagnosed with autism when he was 16. Earlier this year, now 25-years-old, Allan was diagnosed with Hodgkin’s lymphoma and has been receiving treatments at the Cape Breton Cancer Centre ever since.

Allan’s journey with cancer began when I noticed his neck was swollen, and he had an unusual and persistent cough. At the time, he didn’t have a family doctor, so it took a lot of advocating on our part to have him seen and tested. After a CT scan, the results came back – the outcome was something we both had suspected, but also dreaded. The cancer was found in his neck, chest, spleen, and his bone marrow.

Three months into treatment and Allan has lost more than 100 pounds and is almost unrecognizable. He is set to receive 12 treatments within six months, but things have not been going according to plan. Allan’s treatments are so aggressive, that after his fourth one he was hospitalized for almost 27 days, meaning many of his scheduled treatments had to be postponed. 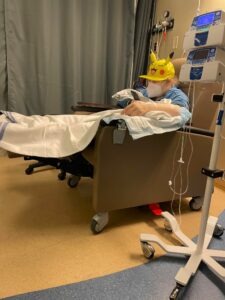 Though our situation seems grave right now, I am grateful to have Allan’s treatments right here, at home. Otherwise, it’s likely we would have had to spend those 27 days in Halifax, in an unfamiliar environment, which would have been quite costly.

Allan’s hospitalization hasn’t been the only hurdle we’ve experienced in receiving his treatments. As a side effect of chemotherapy, patients often get burns or sores in their mouth. For Allan’s to heal, he had to postpone more treatments, and he was prescribed a mouthwash. This mouthwash costs $50 per month, which to some might not be a lot. But, when you’ve had to leave your job like I have to provide care to your loved one, every dollar counts.

Luckily, we had the generosity of donors like you, supporting us in our journey so far. I am so grateful to have received Visa gift cards from the Foundation, which have helped to purchase Allan’s mouthwash, other prescribed medicines, and gas when we travelled for a PET scan in Halifax. Because of donors like you, patients like my son can receive the medicine they need in the fight for their life.

Travelling to Halifax with Allan is no easy feat on a regular day. He is uncomfortable in new and unfamiliar places. He doesn’t like to touch things that strangers have touched, so staying in a hotel is not an option. On our first trip for his PET scan, we were able to travel and stay in our RV. Now that the days are colder, and we’ve been scheduled for a second PET scan, we’ll have to make the drive up and back in the same day. I know this will be taxing on Allan, as he has been so frail as a result of his treatments.

Right now, though still fighting, the lumps on Allan’s neck and chest have significantly shrunk, and he is no longer having breathing problems or coughing fits. Emotionally, we have our ups and downs. Some days he accepts his diagnosis, and other days he grieves his ‘old’ life and routine.

I’m sharing our story today because I know, firsthand, the impact of the generosity of donors like you. I’m hoping you’ll join me in not only praying for my son’s health, but also in supporting the Cancer Care Here at Home campaign this holiday season.

I know Allan would refuse care if we had to travel to each appointment – it’s a situation and an outcome I don’t like to think about.

Please consider joining me today, to support the Cancer Care Here at Home campaign, and patients like my son, who need their friends, family and loved ones by their side during the biggest fight of their lives.

PS – The Cancer Care Here at Home campaign has reached $9.6 million of its $10 million goal, thanks to the generosity of donors like you. Please consider giving to the campaign today to help the Foundation reach 100 per cent of its goal in supporting the Cape Breton Cancer Centre and the more than 45,000 patient visits made annually. Please note: All gifts of $20 or more that are dated for 2022 and received before January 9, 2023, will receive a tax receipt for 2022.

Your ticket for the: Allan MacDonald’s Story – Fighting Hodgkin’s Lymphoma, Here at Home.