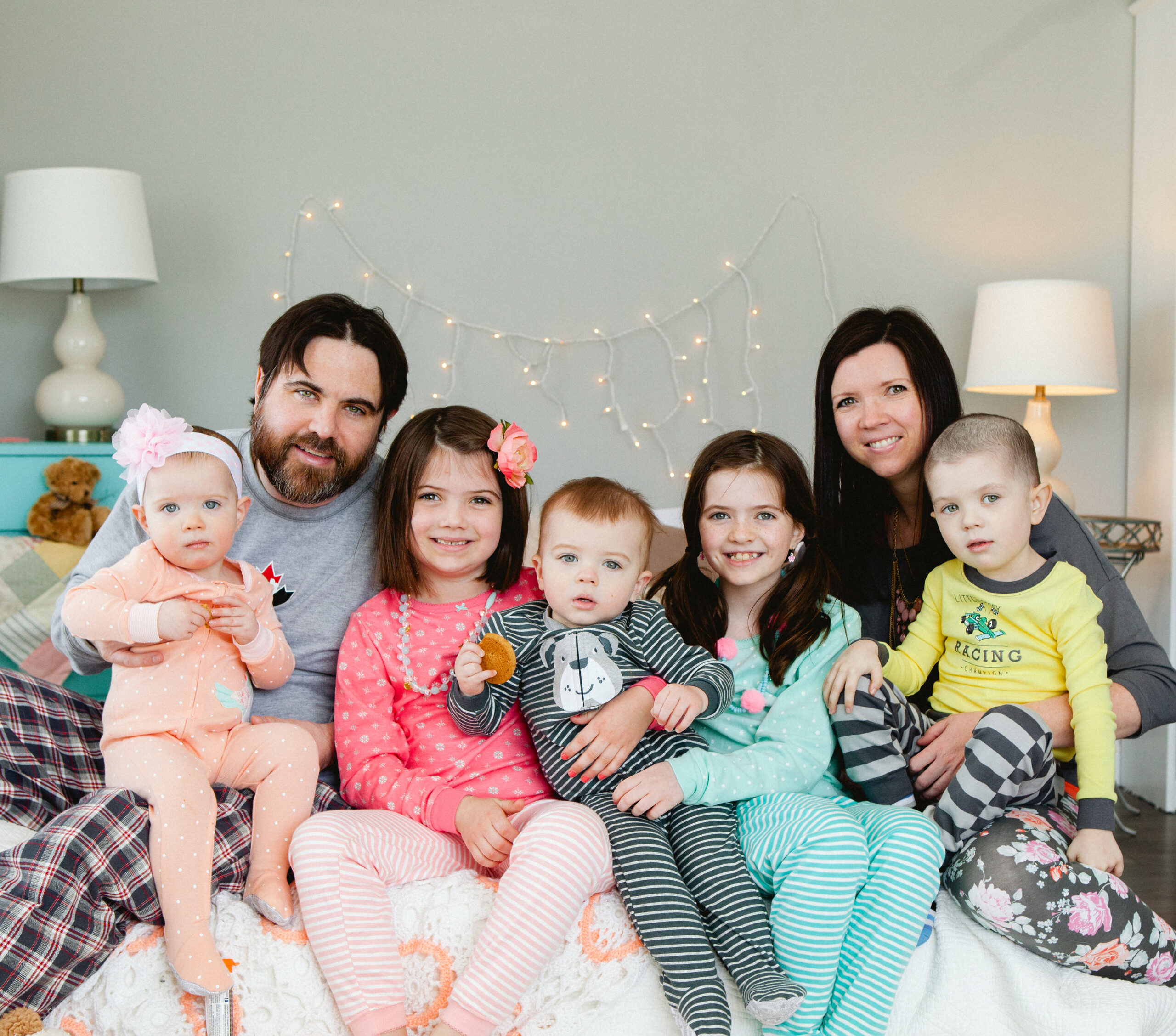 With tears in her eyes and a smile on her face, Nicole Forgeron lovingly recounts a time when her son, Caleb, gathered his four siblings in his arms and posed for a fun family photo. “He adored them. They were his world, and he was theirs.” She described the tight-knit relationship among her five children as “the most precious gift.”

Sadly, their “perfect family life” began to quickly unravel before their very eyes.

In April 2014, Caleb’s appetite slowed and his energy levels decreased. He began napping more often, and was noticeably irritable upon waking. From time to time, he would vomit after he had eaten, but only sporadically, once every few days. At first, it was believed to be a virus that he just couldn’t shake, as his blood work was not out of the ordinary and his symptoms were classic of a harmless flu-like bug.

As Caleb’s symptoms worsened, he grew increasingly more listless as the days went on. Caleb’s parents knew it was more than just a virus.

A pediatrician referral was urgently made by their family physician.

During a thorough physical examination, Pediatrician Dr. Andrew Lynk, discovered a large mass in Caleb’s abdomen, it was approximately the size of an orange.

Dr. Lynk suspected that Caleb was facing a solid tumor cancer, which typically originates in the adrenal glands located on top of the kidneys, called Neuroblastoma.

On Easter morning, after their family Easter Egg Hunt, Nicole, her husband, Mike, and their son, Caleb, packed their bags with a ‘one-way ticket’ on the scariest road trip imaginable. They had no other choice but to say goodbye to their other four children, and travel off-island for further consultation and treatment.

Their desperate hope for a miracle soon to be crushed, as they would then learn that what Dr. Lynk had strongly suspected, was indeed true.

And so, their living nightmare began.

On his third birthday, Caleb was diagnosed with Stage 4, High Risk Neuroblastoma, a rare and very aggressive cancer that had metastasized to multiple sites in his body, including his bone, bone marrow, and a secondary lesion at the base of his throat. His parents were told that only 2 to 4 children in all of the Atlantic Provinces are diagnosed with Neuroblastoma annually and only 60 to 80 children in all of Canada.

The devastation continued to mount, as Nicole and Mike were given the earth-shattering news about his prognosis. Caleb would have a 50% chance of survival, provided he received 15 months of an extremely intensive treatment protocol, including chemotherapy, surgical resection to remove primary tumor, stem cell rescue using the highest dose chemotherapy available, followed by a bone marrow transplant, radiation, and finally, immunotherapy.

The MacArthur family was about to face the most grueling and terrifying battle of their lives. With 8 month old twins at home, and two older girls, Nicole and Mike admit that they were “truly blessed” to have the unwavering support of family and friends in Cape Breton. “If we were still living in Alberta, there is no way we would have been able to do it,” Mike ensures. “We knew that our other children were well-loved and cared for at home, which gave us peace of mind, because now Caleb needed to be our number one priority, 24 hours a day, 7 days a week.”

With the innocence of a child and the spirit of a warrior, Caleb fought this horrendous disease head on.

Much like the superheroes that he proudly wore on his pajamas, he represented the true meaning of strength, determination, and bravery. His ‘famous sword’, a gift for his third birthday, became a symbol of his warrior-like qualities, his remarkable heroism. That sword came at the most opportune time, as Caleb began the battle of his life, for his life. It instantly became part of him, accompanying him to every test, every treatment, every scan, and every surgery. When he gripped his mighty sword, it seemed to fuel him with incredible strength and courage.

Caleb’s parents took comfort in knowing that he never felt fearful. The “sickness in his belly,” as he called it, became his way of life.
While undergoing countless intense chemotherapy and radiation treatments, Caleb’s mom admits, “We felt helpless – because we couldn’t take away the pain. But what we could do was love him, protect him, and help him to enjoy the moments when he felt strong enough to play.”

After he was first diagnosed, Nicole and Mike questioned whether they would ever experience the joy of watching their son play again. But, thankfully, as his treatment initially did what it was supposed to do, Caleb did grow stronger, day by day, in body, mind, and spirit. The MacArthur family had the privilege of many wonderful days with Caleb. They embraced the “good days”, and were inspired and uplifted by his endless strength, determination, courage, and fight. He had a perpetual desire to never give up, even when at his sickest, to live each day to the fullest, to cherish every moment, and to wake up each morning with the positivity, enthusiasm, and innocence that only a child could possess. He had the most pure and genuine love of life and its simple pleasures, all while attached to an IV pole.

Because of his treatment and the restrictions that went along with it, Caleb had to miss out on simple daily pleasures of being a three year old, like swimming in the summer, and taking bubble baths at home. He could no longer ride his bike, for if he fell, a simple scraped knee could lead to dangerous, uncontrollable blood loss. But in true “Caleb spirit”, he never complained about what he couldn’t do, instead he simply embraced and appreciated what he could do. His positive attitude and outlook on life was inspirational and infectious.

Throughout the year, the MacArthurs were on the emotional roller coaster of their lives, experiencing unfathomable highs and lows, never knowing from day to day what the future had in store.

“One of our darkest moments was when Caleb relapsed and the doctors in Halifax told us that we would be going home to Cape Breton for palliative care treatments.” Nicole recalls, “ as Caleb grew sicker, the Peds staff at our ‘home hospital,’ the Cape Breton Regional Hospital, continued to do little things to brighten his day. He was their superhero, too.”

Caleb felt safe at the Regional Hospital, which he and his family refer to as, “our home hospital.” Nicole recalls that the staff on the Pediatrics Unit at the Cape Breton Regional Hospital treated Caleb like “he was their own – they did not simply care for our son, they cared about him, and for that we are eternally grateful!”

“The nurses changed our hospital room and when we walked into the new room, they had replaced the hospital bed sheets with new superhero bed sheets for him,” Nicole’s eyes fill with tears. “All of the ‘little things’ fostered an environment that was warm, caring, nurturing, inviting, safe, and even fun. All of those things defined the hospital experience for Caleb, and for us.”

On March 24, 2015, one year after his courageous and valiant fight began, Caleb earned his real superhero cape and soared to Heaven to begin his next mission – to watch over and protect his family.

“We miss him every day,” Caleb’s dad, Mike, wipes tears from his face, “but we want to carry on his spirit.” The MacArthur family has set out to fulfill the powerful legacy that Caleb created at such a young age. They have fundraised to renovate the Oncology/Palliative Care Room in the Pediatrics Unit at the Cape Breton Regional Hospital, where Caleb spent countless days, including some of the last days of his life, surrounded by his family. They continue to fundraise today in order to support pediatric oncology for families to come.

They are also creating a fund in Caleb’s honor, “Caleb’s Courage” to help children with serious or life-threatening illnesses and their families in Cape Breton for many years to come. The MacArthurs express their heartfelt gratitude to their local community who supported them in many ways over the last year, as well as to all of the healthcare providers who cared so deeply for their son. They feel it is now their turn to pay it forward, and what better way to do so, than to celebrate the courage of Caleb.

“He was brave in the face of the utmost adversity. He fought his courageous battle every day with undeniable strength, grace, dignity, and spirit. He did not ‘lose’ his battle. In my eyes, he was victorious -he was the ultimate warrior, and I was so honored to fight alongside him. He is my hero!” Caleb’s mom expresses with overwhelming pride, love, and emotion.

Being at home together as a family was so important for the MacArthurs, as they said ‘goodbye for now’, to their little angel. Nicole beams as she speaks about Caleb’s legacy, “as my children grow, I want them to always remember how Caleb adored them, and I want them to carry on his spirit, his determination, and his passion for life in all that they do.”

As they venture toward helping other sick children in Cape Breton, the MacArthur family have renovated the Pediatrics Room in a superhero theme, to honor the strongest, bravest little boy they have ever known.

For more information on how you can help the MacArthur family reach their goal for Caleb’s Courage, please contact us: ashley.mackeigan@nshealth.ca or 902-567-7752

Your ticket for the: Caleb’s Courage